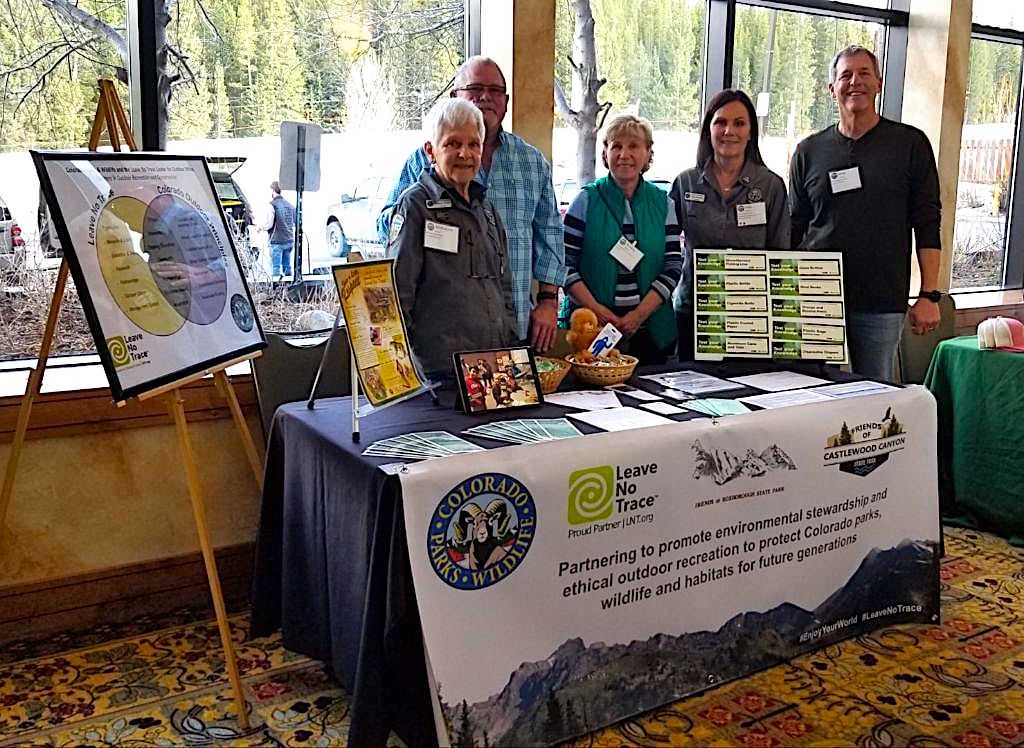 Photo: Volunteers from the Friends of Roxborough State Park and Friends of Castlewood Canyon State Park attended the 2019 Partners in the Outdoors Conference in Breckenridge, Colorado.

Q: Congratulations on obtaining a $5,000 grant from the Colorado Parks and Wildlife Partners in the Outdoors program! How did your organizations learn about this opportunity?

A: First of all, our team would like to thank Colorado Parks and Wildlife for this award, and for its leadership in the “Partners in the Outdoors” program. We have attended the annual Partners in the Outdoors Conference the last two years. The conference is an 2-day event that brings together organizations, agencies, businesses, schools and communities engaged in advancing outdoor recreation and conservation in Colorado. We learned about the grant program by attending the conference.

Q: What were the main themes of your grant proposal?

Q: You had to prepare a budget — what did it look like and what were some of the biggest needs that it expressed?

A: To prepare our budget, which was required by Partners in the Outdoors, we broke our proposal down into five main categories of action. Those included:

One of our biggest needs was to ensure we focused some of these actions and dollars on Castlewood Canyon State Park which is applying for the Center’s Gold Standard Sites designation, following the lead of a current Gold Standard site, Roxborough State Park. This is critical to show that the tools, documents and programs developed at Roxborough are easily adaptable for other sites.

Q: What do you think were the main factors for your group’s grant request getting approved?

A: In 2017, a group of volunteers took the initiative at Roxborough State Park to combat the adverse impacts we were seeing caused by an increase in visitation, including an influx of visitors who were not familiar with how to recreate outdoors responsibly. We determined that implementing and educating our staff, volunteers and more importantly, our visitors in Leave No Trace would be an effective way to minimize the impacts we were observing such as litter on the trails, visitors going off trail and forming social trails, wildlife disturbance and other negative visitor interactions. We developed a goal to become Gold Standard Site by the year 2021 — we actually achieved that goal ahead of schedule, in 2018.

Q: What role did the Leave No Trace Center for Outdoor Ethics play in the development of your programming, and in the grant-seeking process?

A: The Leave No Trace Center for Outdoor Ethics and its staff provided assistance at every turn. For example, when we first began looking at the impacts and breadth of our social trails problem, Leave No Trace staff provided copies of research on how to conduct the social trail assessment, and also on the best remedies for this issue. Center staff provided training for our volunteers and helped expand our training capabilities, and they attended planning meetings to help keep us on the right direction toward attaining a Gold Standard designation. They partnered with us at the 2019 Partners in the Outdoors conference on an exhibitors table that emphasized the power of partnerships in implementing Leave No Trace as a means to advance outdoor recreation and conservation in Colorado. Finally, they assisted us with the development of our grant proposal to the Partners in the Outdoors program. We cannot thank the Center enough for all of its support.

The Leave No Trace Center for Outdoor Ethics extends congratulations to the Friends of Roxborough State Park and Friends of Castlewood Canyon State Park for their well-earned success. Similar grant programs exist across the United States — organizations that help protect natural areas by teaching Leave No Trace are encouraged to reach out to the Center to discuss place-based grant opportunities. Working together, we can seek grant sources that expand opportunities and bring new resources for local initiatives. Send a message to Mark Eller, the Center’s Director of Foundations and New Business, to discuss the possibilities for securing a grant with a place-based grant maker.