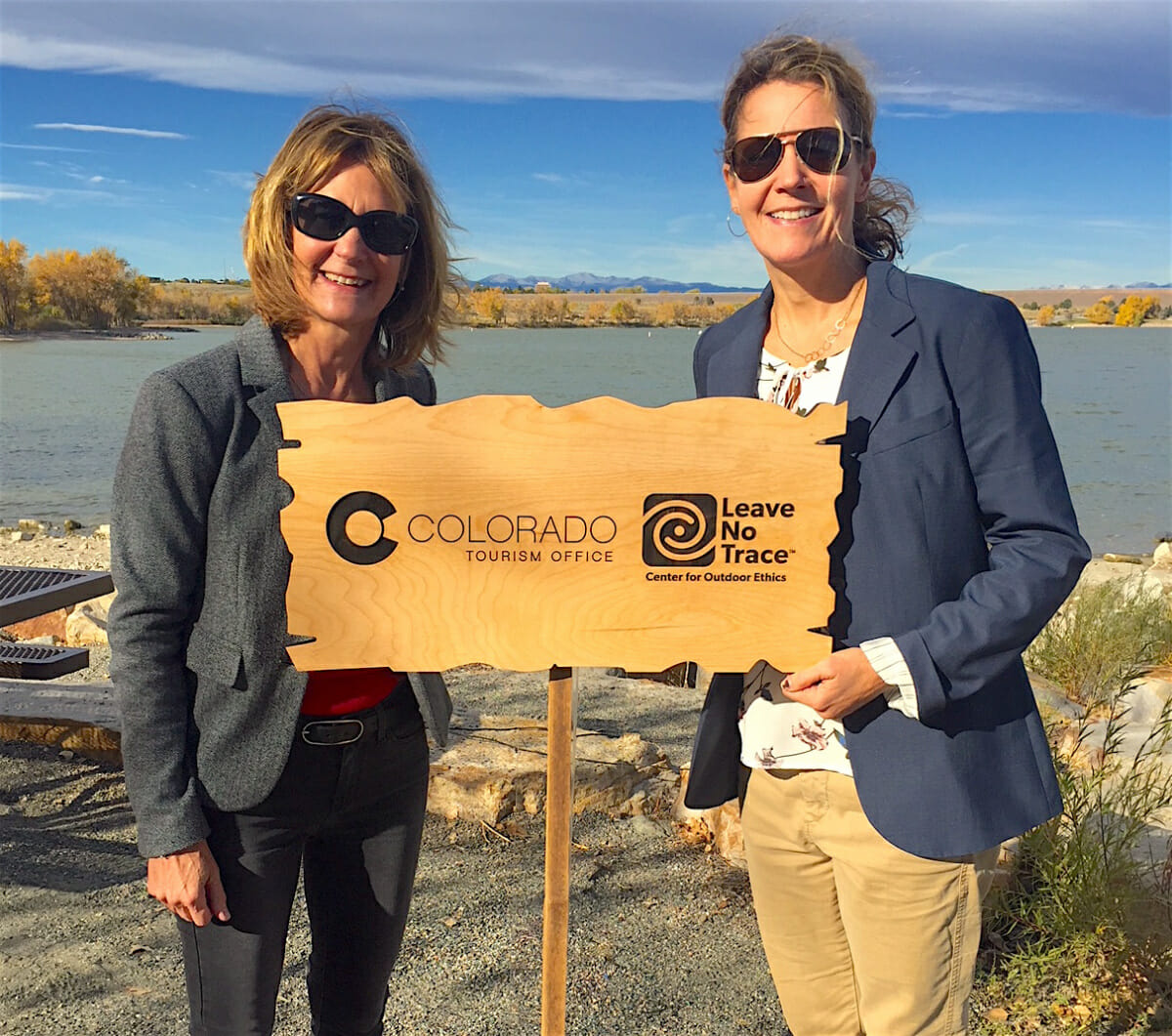 Aurora, CO (Oct. 16, 2017) ─ In a joint news conference this week with Lt. Gov. Donna Lynne, the Colorado Tourism Office (CTO) and the Leave No Trace Center for Outdoor Ethics announced an innovative partnership aimed at encouraging the state’s 82 million visitors to travel like locals and be active stewards of Colorado’s precious natural resources. 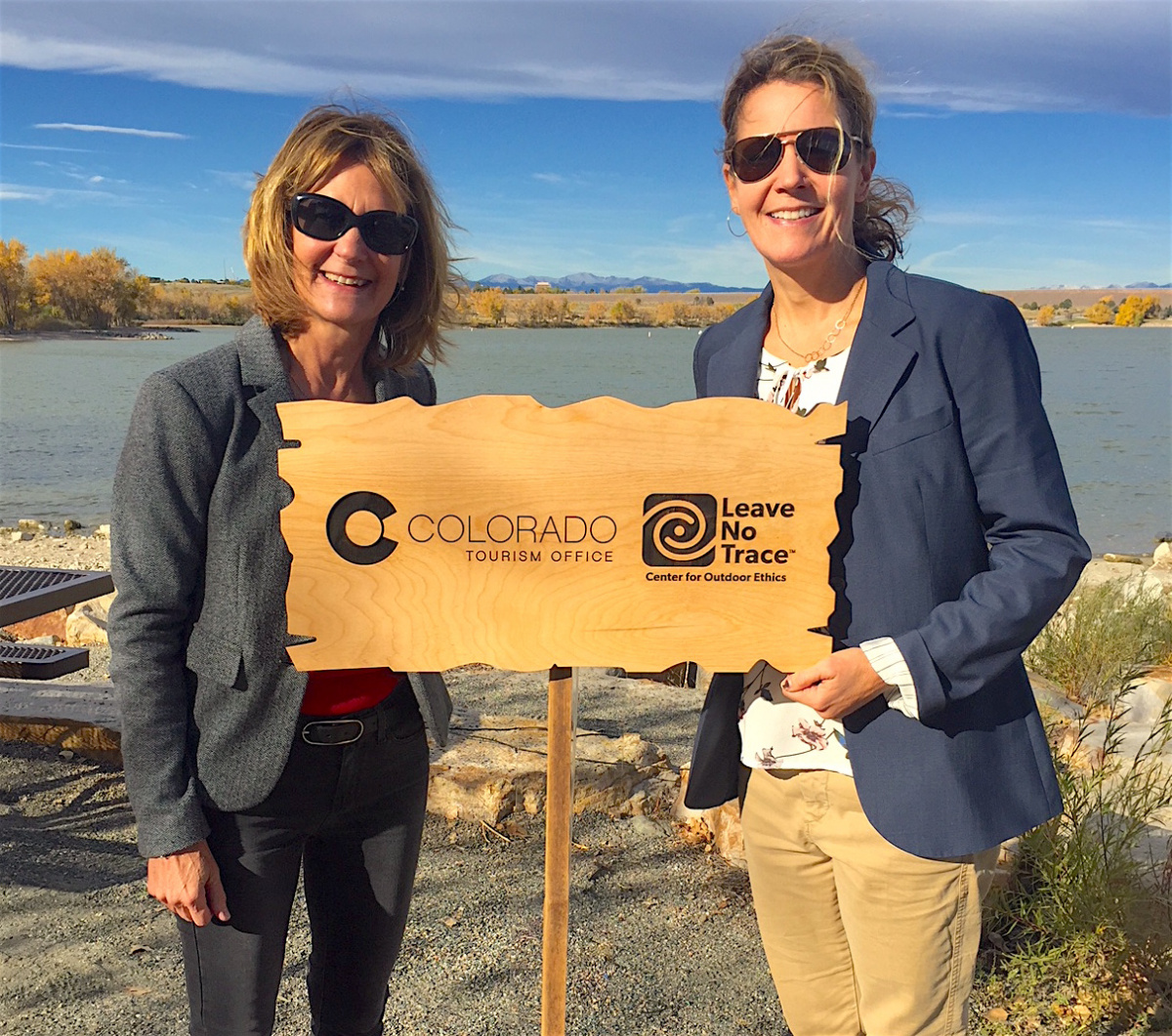 The event inspired coverage in the Colorado Business Journal and other regional news outlets.

The state partnership is a first for the national the Leave No Trace Center, which counts the primary federal public land agencies as well as Subaru and many major U.S. outdoor retailer among its strategic partners.

“This is a significant step forward in our state’s quest to identify and then address threats to what makes Colorado such an extraordinary place to live, visit and work,” said Lynne, who joined representatives of the CTO and the Leave No Trace Center at a news conference and then a volunteer cleanup of Cherry Creek State Park in Aurora. Cherry Creek’s 2 million-plus visitors a year makes it both the most-visited and most-impacted of Colorado’s 41 state parks.

The CTO and Leave No Trace have outlined their new relationship in a six-page memorandum of understanding intended as a model for other states as well. An accompanying task agreement describes plans for collaborations with at least three tourism industry sectors to create best practices for travelers. The two organizations also will collaborate on messaging, research and a statewide public lands cleanup project in the coming year.

“This new relationship, at its core, is a response to the heartfelt concerns many Coloradans express about the impacts of visitation on the places they love,” said CTO Director Cathy Ritter. “By sharing the Leave No Trace Seven Principles in compelling ways, we can inspire and empower visitors and locals to leave our state better than they found it.”

Dana Watts, executive director of the nonprofit Leave No Trace Center, said her board of directors sees much potential for expanding the reach of its iconic messaging through new state partnerships.

“Since our founding in 1994, we’ve magnified our message primarily through strategic alliances with organizations that share our passion and commitment,” Watts said. “This new partnership with the CTO holds huge potential for influencing many millions of people. Safeguarding natural resources is extremely important in a state like Colorado, where 37 percent of lands are federally owned and another 5 percent are in state hands.”

The partnership is the latest initiative to come from the Colorado Tourism Roadmap, a three- to five-year strategic plan to build the Colorado tourism industry’s competitive advantage. Early thinking about the partnership stemmed from concerns expressed by tourism stakeholders, elected leaders and residents in 20-plus listening sessions around the state.

“The outdoor recreation industry for years has desired a deeper connection with the tourism industry,” said Luis Benitez, director of the Colorado Outdoor Recreation Industry Office. “This new relationship between CTO and Leave No Trace clearly shows the commitment of Colorado tourism toward protecting the natural resources that drive our state’s $23 billion outdoor recreation economy. Once again, Colorado is leading the way through an innovative approach to creating partnerships across industry sectors.”